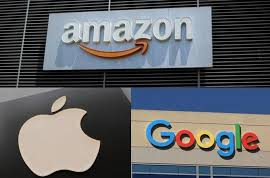 Yes, it’s true! According to a new report by Kantar and WPP, Amazon occupies the top spot in the index, overtaking the two most trending companies i.e. Apple, which ranked No. 2, and Google, which ranked No. 3 in the world’s most valuable brand ranking. The top 100 most Valuable Global Brands ranking according to the 2019 BrandZ was ever rules by technology, but five of the top 10 were assigned as tech providers. And the rest five were designated as: Amazon and Alibaba (#7) were designated in the retail space, while McDonald’s (#8) recent purchase of personalization software provider Dynamic Yield was well documented and Visa and AT&T completed the top 10.

If we talk about the last year performance (2018) of those in the top 10, then Google, the winner of last year fell to #3 while Tencent dropped to #8 from fifth position. Despite of the drop in position of McDonalds to #9, report noted that this brand‘s value had increased by three percent. And in comparison, Amazon saw a 52 percent of the brand growth.

According to the reports, Chinese brands were beginning to make their presence felt. There are nine brands that entered the BrandZ™ Global Top 100 2019 as newcomers, out of which six come from Asia, including Xiaomi, Haier and Meituan. In order to make progress, report emphasized the importance of disruptive business models. It has been seen that Haier (#89), a provider of consumer electronics and home appliances, has committed to co-creating an open ecosystem brand in the IoT (Internet of Things) era with its customers and partners, as BrandZ puts it.

An example of how the technology has overcome all this is from the story of Coca-Cola. As in 2013, Interbrand ranked apple as the most valuable brand, putting to an end, thirteen year of control from the power of Coca-Cola. According to the 2019 BrandZ ranking, Coca-Cola is at #14, a ranking unchanged from the previous year.

So, this is not to say that everything is going well for the biggest tech brands. Report shows that how social media platform individually are facing continuous challenges to regain the trust and value, a more ‘volatile world…in which brands must continually predict the changing consumer needs and expectations’. If we talk about Instagram, research from Rakuten Marketing in March found the social platform had brought down YouTube as the best place for influencer content. The report praised brands for considering consumer interest and moving more towards ‘honest disclosure’ of partnerships.

According to David Roth, chairman of BrandZ “The growth in value of this year’s top 100 brands to an all-time high proves the power of investing in brands to deliver excellent shareholder value. And success behind this headline growth comes from a new miracle of ecosystem brand building.”

Also Roth added, “We’re seeing a move from individual product and service brands to a new era of highly-disruptive ecosystems. Brands need to understand the value this type of model can create and should adopt its approach to be successful in the future.”